Neuroprotection of Xenon in the Developing Brain

Patients under 15 years old represent ~10% of the hospital inpatient population, yet clinical research on anesthesia in the developing brain remains limited [1]. Certain anesthetic agents are known to induce neurotoxicity in the developing brain of rodents and nonhuman primates; evidence in human children is less consistent but appears to support the animal model, leading the FDA to issue a warning in 2016 against “repeated or lengthy use of general anesthetics” in children and pregnant women. A rodent study exposing neonatal rats to a conventional combination of isoflurane, nitrous oxide, and midazolam found a 68- and 57-fold increase in neuronal degeneration in laterodorsal and anteroventral thalamic nuclei, respectively [2]. General anesthetics alter synaptic function through modulating specific ligand-gated ion channels, such as the ʏ-aminobutyric acid (GABA) receptor and the N-methyl-d-aspartate (NMDA) glutamate receptor [3]. As a result, research has explored anesthetic agents, including xenon, that provide neuroprotection for the developing brain.

The noble gas xenon has been used as an anesthetic for more than 50 years. It is a NMDA receptor antagonist, but unlike others of this nature, xenon is a small nonpolar atom and therefore able to cross the blood-brain barrier. Xenon exposure significantly increased levels of phosphorylatedcyclic-AMP response element-binding protein (pCREB), a transcription factor pivotally involved in growth and connectivity of immature neurons [4]. Phosphorylation of CREB initiates recruitment of coactivators such as CREB-binding protein and RNA polymerase II to ultimately activate genes including the pro-survival protein Bcl-2 and the neurotropic factor BDNF [4]. In contrast, N2O, another anesthetic agent which is also a NMDA receptor antagonist, does not increase either levels of pro-survival proteins or pCREB transcription [5]. Nitrous oxide also features adverse hemodynamic properties, unlike xenon [6].

Xenon’s regulation of these pro-survival genes may explain its mitigation of isoflurane-induced apoptosis, as supported by both in vivo and in vitro studies. Rats that had undergone xenon pretreatment and were then administered isoflurane reduced cognitive impairment compared to hypoxic pretreatment and nitrous oxide pretreatment [7]. Neuroprotection due to xenon is thought to arise from its inhibition of mitochondria-induced activation of the caspase 3 pathway, a cascade considered the “executioner of apoptosis” [5,7]. An increase in caspase 3-positive cells was visualized using Western blotting after the administration of nitrous oxide and isoflurane; this is attenuated with xenon pretreatment, but not N2O pretreatment [7]. Due to its direct effects on neural tissue, caspase 3 increases neurological deficit, as observed in a neonatal model of hypoxic-ischemic injury [8]. Administration of hypothermia and xenon alone did not reduce infarct volume in week-old rats, but asynchronous administration 1 hour after hypoxic insult produced a significant neuroprotective effect [9]. In a feasibility clinical study, cooled infants with encephalopathies showed suppression of seizures and background EEG activity after xenon administration [10].

While xenon may have beneficial effects, nuances exist within its administration that convolute its reputation. Paradoxically, at 0.75 to 2 minimum alveolar concentration (MAC), xenon alone induced dose-dependent cell death by 40% in rat hippocampal cultures. Although identical tests with isoflurane and sevoflurane returned more substantial increases of 63% and 90%, the cell death attributed to xenon is significant [11]. While it is true that short periods of xenon exposure (such as 2 hours) are associated with neuroprotective aspects, longer periods appear to contribute to mild brain toxicity [6].

Although many preclinical studies have supported the use of xenon preconditioning to mitigate the deleterious effects of other anesthetic agents, a lack of clinical trials delays the translation of these findings to human models. The specific mechanisms of xenon therapy in humans remain to be elucidated. 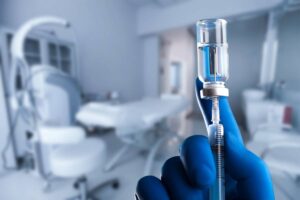