Methadone is a synthetic opioid analgesic used as a maintenance drug in those with opioid use disorder (OUD) and increasingly for cancer or chronic non-malignant pain.1 Methadone was first created in 1937 by two German scientists, Max Bockmhl and Gustav Ehrhart, who were searching for a pain killer that was less addictive than morphine.2 At the time, they called the substance Hoechst 10820 or polamidon.2 Years later, during World War II, another team of German scientists expanded on earlier research and began synthesizing the substance because of short supplies of morphine and other analgesics.3 By the end of the war, the United States obtained the rights to this medicine and renamed it methadone.3 While it was first marketed solely as an analgesic, it became an important part of OUD treatment in the early 1970s.3 Due to methadone’s prevalence in contemporary medicine, anesthesia providers must be familiar with its mechanisms, clinical uses and side effects.

The molecular formula for methadone is C21H27NO.4 It is a potent m-opioid receptor agonist, considerable d-opioid receptor agonist and a N-methyl-d-aspartate (NMDA) receptor antagonist.5 It also has some agonist actions at the κ- and σ-opioid receptors.6 Its agonism of the m-opioid receptor give it analgesic effects comparable to other opioid drugs like morphine.7 Meanwhile, its actions at NMDA receptors result in its supposed efficacy for chronic neuropathic pain,8 though the data on methadone for such chronic pain are mixed.9 Methadone is metabolized by the CYP3A4, CYP2B6 and CYP2D6 enzymes in the liver.10 Its primary metabolite is  2-ethylidene-1,5-dimethyl-3,3-diphenylpyrrolidine (EDDP), which is inactive.11 Five to 50 percent of a methadone dose is eliminated in the urine unchanged, and three to 25 percent is eliminated as EDDP.11 In general, methadone’s biological mechanisms are similar to those of other opioid drugs.

Methadone can be used for detoxification (i.e., to reduce withdrawal symptoms during opioid use cessation), maintenance (i.e., as a replacement for opioid drugs) or as a pain reliever.12 Methadone may also have advantages over other opioid drugs during the perioperative period.13 Because it has a slow onset and offset of action and is long-acting, it can be useful for perioperative pain management.14 In fact, methadone has the longest half-life of all clinically-used opioid drugs.15 Thus, a single 20-milligram dose administered to an adult at induction of anesthesia can provide significant pain relief throughout the first one to two postoperative days.15 Also, some authors have found methadone to be effective for cancer pain.16,17 Unlike other opioids, methadone has anti-hyperalgesic and anti-allodynic properties that protect a patient against tolerance and/or sensitization.13 Also, compared to other opioids, methadone has fewer active metabolites and a lower risk of neuropsychiatric toxicity. Therefore, high doses needed to manage severe pain or addiction are less likely to result in delirium or seizures.4 Overall, methadone’s long-acting nature make it more useful than other opioids for postoperative pain and maintenance programs.

Like other opioids, methadone is accompanied by a variety of side effects. Patients taking methadone may suffer from restlessness, nausea, vomiting, slow breathing, itchy skin, heavy sweating, constipation or sexual problems.18 More serious side effects include difficulty breathing or shallow breathing, faintness, chest pain, a rapid heartbeat, hallucinations or confusion.19 For pregnant patients, use of methadone can lead to fetal dependence and infant withdrawal symptoms.7 Though the drug’s long-acting nature is an advantage, it also increases the potential for drug accumulation before achieving measurable blood levels. Therefore, there may be a risk of overdose without after two to five days of treatment with methadone.8 A methadone overdose can lead to respiratory depression or even death.20 Finally, though methadone is used to help treat OUD, it is an addictive substance in its own right.21 Due to its potentially adverse effects, clinicians should be cautious when prescribing methadone.

Methadone is a synthetic opioid drug that acts on m-, d-, κ- and σ-opioid and NMDA receptors to produce analgesic effects. Methadone is primarily used for detoxification, maintenance and pain management, particularly for chronic or cancer-related pain. Though it has many advantages over other opioids, including a long duration of action and lack of active metabolites, it also comes with many adverse effects. Given its abuse potential and potentially fatal consequences, anesthesia providers should carefully consider using methadone with their patients.

Heinzerling KG. Applying Best Practice Guidelines on Chronic Pain in Clinical Practice—Treating Patients Who Suffer From Pain and Addiction. In: Danovitch I, Mooney LJ, eds. The Assessment and Treatment of Addiction: Elsevier; 2019:137–156. 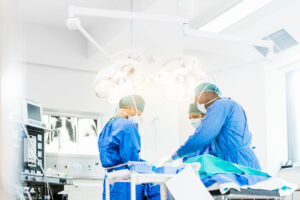